Shaving horse that I built from what was once a 10 x 12 red oak tie beam, salvaged from an 1840's barn. Also used some beech, ash, & cherry. This is where the final peg shaping takes place. 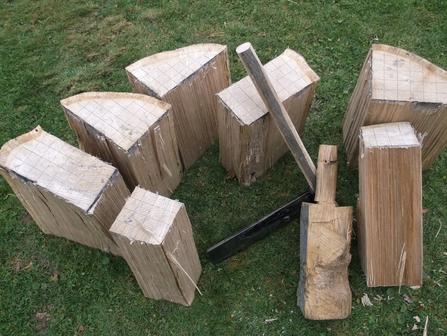 I am asked quite often what wood specie I would recommend for a given project. There really is no one correct answer, as this is an individual preference. After working with many different wood species over the years, I've developed a strong preference for eastern white pine. Eastern white pine has many desirable characteristics that make it one of the most suitable species to be used in heavy timber construction. It tends to remain dimensionally stable, has a relatively low rate of shrinkage, a beautiful rustic quality, less prone to surface checks and "ring-shake" than hemlock, a nice strength-to-weight ratio, and it is much lower in cost than most hardwoods. All-in-all, as one well-respected timber framer/author put it, it comes pretty close to being the perfect timber framing species. Also, for the hand-crafter practicing his trade with hand-tools, EWP has a very workable texture that is a pleasure to work with.

Another factor in my favoring of white pine is that over the past several years, I've come to do business with a sawmill in a nearby Amish community that saws white pine and hemlock exclusively. I can always depend on the high-quality timbers and consistently accurate sawing they provide for all my projects. These timbers are sawn on a band-mill which leaves a rough-sawn, relatively smooth surface, yet mimics the faint vertical sawing pattern left by old sash-saw mills, or up-and-down mills as they were known in the early 1800’s. (Typically in the past, large logs were kept onsite and hewn square with the broadaxe, while the smaller logs were taken to the local sawmill). In addition, to help keep building costs down I prefer not to purchase timbers from distant sources, as this eliminates the high transportation costs that inevitably get passed on down to the client. Therefore, I make virtually all timber purchases from local sawmills, which helps out the small business owner in our economy.

The process of raising your timber frame usually occurs in two phases. First is the onsite pre-assembly of the timber framework, where the bents, or cross frames are laid out, assembled and pegged, lying flat on the deck and ready to be raised. This process can take anywhere from 1-3 days. On raising day, the bents are tipped or lifted into their vertical positions. Connecting girts, braces, top plates and rafters are then installed. Traditionally, it has long been the custom for family and friends to lend a helping hand in the frame-raising process, and they are welcome to attend. But for safety and efficiency, some form of mechanical assistance is usually necessary on raising day. 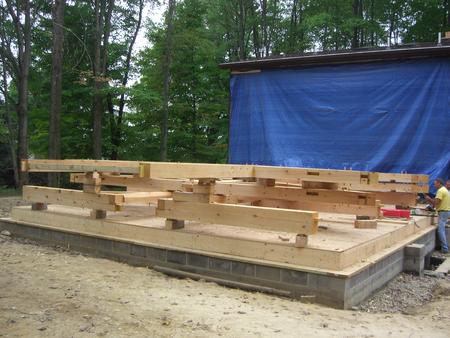 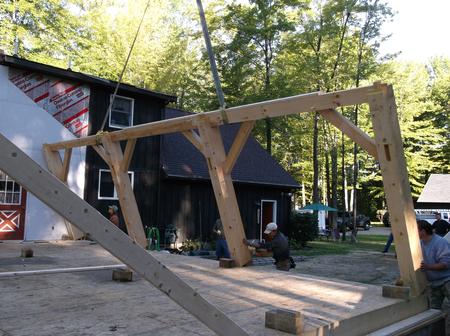 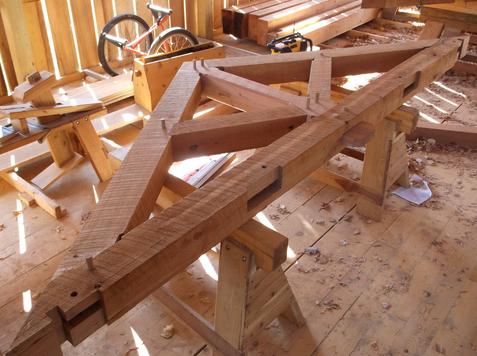 White oak billet hand-split with the tools for end-grain violence.

Timber Framing is an ancient building craft dating back thousands of years, a system of building the skeletal framework of structures using large wooden posts (vertical), beams (horizontal) and braces (diagonal), fastened to each other with handcrafted joinery and locked in place with wooden pegs. This method of construction was brought to this country in the 1600’s by the European immigrants of England, Germany, Holland, and France. Each ethnic group brought with them their own building traditions, which included individual preferences for timber species, joinery, and framing styles. In the New World that these settlers created, and prior to the Civil War and Industrial Revolution, virtually all barn and house frames were built of heavy timber construction, (only back then it wasn’t referred to as “timber framing”, it was simply “carpentry”). The standard joint used to fasten these timbers together is the mortise & tenon joint. Its origins in wood-working can be traced back to approximately three thousand years ago. 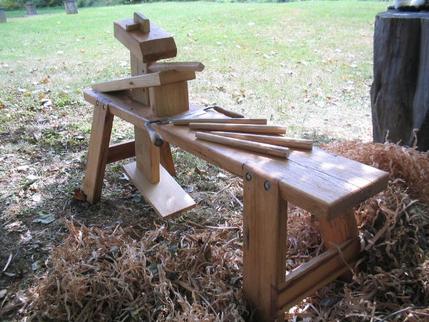 My choice of joinery layout on timbers is accomplished using a traditional system believed to have been developed here in America around 1800, called Square Rule Layout. This system replaced the older and more time consuming method, which was brought here from Europe and called Scribe Rule Layout, in which each timber was laid out on the ground and scribed, or custom fit to its mate. In Square Rule Layout, small reductions, or housings are cut at joint locations, thereby creating a slightly smaller, perfect inner timber that is square, straight, and uniform in size, thus overcoming any organic or milling irregularities and allowing the pre-cutting of timber joinery and bypassing the repeated assembly/disassembly process that was inherent in the Scribe Rule technique.

In timber frame construction, timber size is largely determined by the frame design, the load placed on each individual timber, the species and grade of each timber, and the design (strength) values allocated to that particular species. For example, eastern white pine has relatively low design values when compared to, say, northern red oak, which will in turn necessitate slightly larger timbers in your frame. So typically, and depending on the species and design, posts will be no smaller than 8x8, tie beams around 8x10, top plates in the 8x10 range, and all braces are of a hardwood species and are 4x6. Also being design/span/specie dependant are joists and common rafters, which are in the 5x7 to 6x8 range. In a principal rafter design, these rafters can be as large as 8x10 and can look quite impressive overhead.

Another issue related to structure size is the fact that only continuous-length tie beams, which span the width of traditional timber frames and were standard in barn and house frames of the past, are incorporated within the frameworks that I build. These tie-beams and their joinery must be able to withstand the tensile stresses that can be generated within a frame, and it is my belief that a continuous-length tie-beam, as opposed to one that is spliced and/or splined (and occasionally seen in modern frames), will stand up to these structural forces the best. There are less-critical forces acting on timbers that run parallel with the ridge line (top plates), therefore scarfed (spliced) timbers can be, and traditionally were, used in these locations to lengthen a structure when desired.

Please contact me for a 31 page booklet containing background info on myself & previous projects, behind-the-scenes details offering insight into my personal business philosophy as it relates to you and I, the 10 factors that dictate how I price my work, specifics concerning the services & materials you will receive from SPTJ, a VERY detailed budget worksheet, and a design questionnaire. No shiny glossy pictures, just LOTS of helpful and (hopefully) interesting information!

Pre-assembly of bents on deck.

Wall assembly being set in place on raising day.

The pegs that lock the timber joints together are all individually hand-made. A grid is laid out on straight-grained billets of white oak or red oak, and pegs are hand-split using the same method and tools as our forefathers once did: a large wooden club and froe, followed by shaping on the shaving horse with the drawknife, with a little touch-up from the block plane. This process yields a very strong peg that is straight-grained from tip to tip, with no grain run-out that is common in sawn peg stock. As was traditional, pegs are octagonal in shape and tapered along their length, which facilitates the draw-boring process, where the tenon peg hole is offset from the mortise peg hole, so that when the peg is driven into these misaligned holes, it will draw the joint tight and hold it tight throughout the timber-drying process. In barn frames of the past, protruding peg lengths were left intact and were not sawn flush with interior timber faces, which proved to be quite handy in the hanging of various small farm implements.

In many early American timber frames, joiners indeed used a square peg at specific connections within the frame, in securing such members as: lapped half-dovetail braces, purlins to principal rafters, and particularly in the attachment of rafters to the top plate. In Dutch barns, square pegs have been found in the thick oak planks of the threshing floor, attaching them to the timber floor system below. The incompatibility of the square peg into the round hole, combined with the wedging effect it provided, made for an unusual but very strong fastening technique. This square peg/round-hole connection has held up well for hundreds of years.

In securing rafters to the top plate, I deviate from tradition a bit and rely on a more modern solution, the GRK structural screw. Using fasteners whose structural attributes can be quantified always makes building code officials happy, and provides a blind, unseen solution to creating the necessary resistance to wind uplift in the roof system. For a truly traditional structure, the square peg may be used in place of the GRK screw for rafter attachment (contingent upon building code approval).