Please contact me for a 31 page booklet containing background info on myself & previous projects, behind-the-scenes details offering insight into my personal business philosophy as it relates to you and I, the 10 factors that dictate how I price my work, specifics concerning the services & materials you will receive from SPTJ, a VERY detailed budget worksheet, and a design questionnaire. No shiny glossy pictures, just LOTS of helpful and (hopefully) interesting information!

In following one of the standard practices of house expansion in late 17th century Colonial America, a full-length shed “lean-to” addition was sometimes added to the north side of standard two story houses. Where location allowed, houses were constructed facing south, with the addition lowering the roof line on the rear north end, thereby channeling winter winds up and over the house. By the end of the 17th century, the lean-to was no longer just an addition, but had become an integral part of the structure itself. The saltbox as a house-form was here to stay, and has remained popular ever since. The structure acquired its name due to its resemblance to the salt storage bins of that period.

Traditional English Tying Joints at the rear of the frame add ethnic flair and uncompromising structural integrity to this classic New England-type frame.

The Traditional English Tying-Joint was used in the joining of the four timbers that connect the sidewalls, bents (cross-frames), and roof.  This often required the use of flared, or gunstock posts, which the English referred to as “jowled” posts. These post timbers were hewn square with the flared, thicker butt end of the log/timber being located at the top of the post, thus allowing for a continuous grain-flow pattern back into the post, and also to accommodate the double tenons on the post top where the top plate and tie beam intersect. Central to this tying assembly is the lap dovetail joint at the tie beam/top plate interface. While similar tying joints were found in the heavy timbered structures of the past, it seems that the lap dovetail joinery was especially favored by English carpenters. The principal rafters tenon into the tops of the tie beams, forming a triangular, rigid structural framework. The English Tying-Joint was quite common in frames for roughly a 600 year period, its origins beginning in England around 1250 and continuing on here in  America until about 1850.

Complimenting this design is the massive principal rafter/common purlin roof system , which was very characteristic of roof framing in early colonial America. While non-structural in function, the king-posts at the rafter peaks add much visual interest to this traditional frame.

Oftentimes a structure is defined by the type of roof system it supports. This gambrel frame is characterized by, and derives its name from the change in roof pitch at roughly the midpoint of the roof slope. This feature maximizes walk-able headroom in 1-1/2 story structures, which in this particular design allows 6’ of headroom while standing 3’ from an exterior wall.

The origin of the term “gambrel”, as applied to the roof form, was discussed in the 1884 publication American Agriculturist; with some saying it referred to the crooked or hooked piece of wood that was used to suspend slaughtered livestock from a barn beam for dressing. It was shaped so as to be placed between the gam, or gamb tendon and the bone in the hind legs of the animal. Others at the time said the gambrel roof most resembled the “hock”, or the joint in the upper part of the hind leg of a horse. 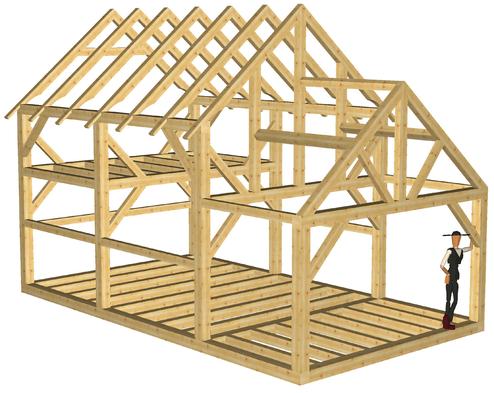 the compressive force of a hardwood wedge. Inserted above the tenon and from the inside, this wedge can periodically be driven ever so tighter as minor shrinkage occurs in the timbers. The pegs then are able to function in a secondary fastening capacity within this joint. When properly designed and well crafted, this joint has few equals in its ability to stand up to the forces of tension that are generated from outward rafter thrust at the plate. The wedged half-dovetail joint soon emerged as one of the favorites in the joinery repertoire of the early American carpenter, and can be found in frames representing all nationalities.

The “dropped” (lowered) tie beam assemblies are just one of the identifying characteristics that show up in barn & house frames built after about 1820 in most areas of the Reserve. Along with a design change in roof systems from purlins to common rafters, this frame type became symbolic of the changing cultural building patterns that emerged in the landscape of pioneer America by the middle of the 19th century. This change in framing style has led to the speculation that a more simplified/quicker building process (design, layout & joinery) was needed to accommodate the fast growing population on the new American frontier.

During the American Revolution, British troops raided and burned several Connecticut towns, with these folks losing their homes and everything they owned. Approx a half-million acres of land in the north/central part of Ohio, bordering Lake Erie, was set aside for these Connecticut residents to assist them in re-building their lives. This part of the Connecticut Western Reserve became known as The Firelands. Much of the settlement of the region did not come until the War of 1812.

An interesting timber-frame cabin that features two different roof styles, with the main frame sporting a common rafter roof & the porch framed with purlins and a decorative kingpost. "Down-braces" in the loft add structural rigidity to the knee-wall area of the posts in countering horizontal roof-thrust. Historically-rooted timber joints include wedged half-dovetails at tie-beam/posts and English Tying Joints at the front porch posts. Would make an ideal hunting cabin!

The historically inspired timber frame designs shown on this page are just a small sampling of some of the frameworks and their traditional joinery that have influenced my building philosophy. These small, cabin-type frames would make a fine woodworking shop, hunting cabin, small horse barn, or a weekend get-a-way cottage, while the larger “gambrel” frame was designed as a residence for a young couple or a small family. These frames are priced in "kit-form", where you or your GC would assemble and raise the frame. I supply very detailed assembly instructions, along with a set of measured drawings.

Each timber is clearly labeled according to it's orientation within the frame.

*The timbered floor system shown in the illustrations is not included in the prices.

With the head of the tie beams extending beyond the posts that feature double tenons, tension resulting from rafter thrust at the intersection of tie beam, top plate and post top is all but eliminated.
This cabin was designed for those who do not want or need loft space. It would make a fine woodworking shop, or, if constructed of a rot-resistant species, could be left open on all sides to serve as a summer picnic pavilion. 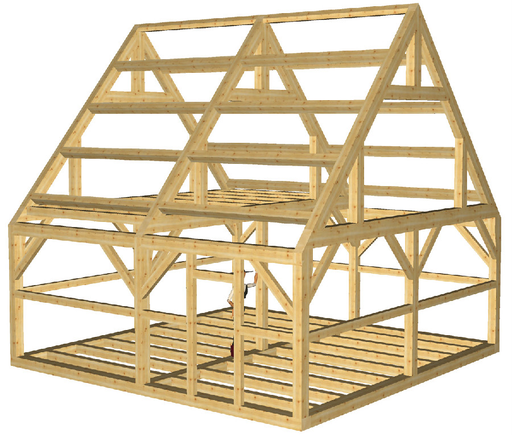 By the time the westward bound settlers reached this area (N.E. Ohio) of the Connecticut Western Reserve in the early 1800’s, the frames they began building here reflected a shift in building form that began to emerge and separate from the first generation of “English” frames that dotted Massachusetts Bay in the 17th century. With this gradual evolution of framing schemes, some structures (usually barns), began to feature a story & a half plan, in which the wall posts extend above the tie beams, usually around 1-4 ft.

Accompanying this transitional design change was a gradual switch in joinery layout methods from the use of the labor-intensive “scribe rule” layout to a more efficient system developed in early 19th century America called “square rule” layout. This particular frame-type, considered a truly "Americanized" design in its simplest form, reflects the blending of Dutch and English framing traditions which occurred sometime during the ethnic melting pot of the late 18th century.

Featured in this frame is the use of the wedged half-dovetail mortise & tenon joint at the tie beam/post interface. This joinery arrangement, thought to have originated here in America, combines the locking geometry of two dovetail planes (the tenon bottom and its corresponding post mortise), with 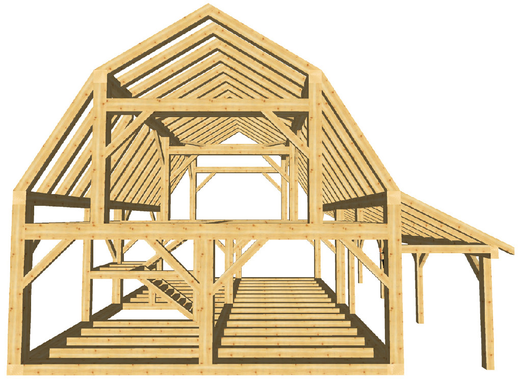 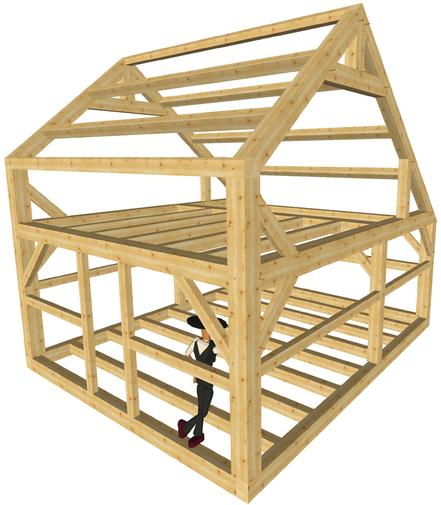 This frame exhibits several characteristics representative of the types built by the English settlers in the Massachusetts Bay Colony during the 17th century. True to its ethnic origin, it features “gunstock” posts that flair out at their tops to accommodate the joining of post, plate, tie beam, and rafter in what is known as the Traditional English Tying Joint, developed in 13th centuryEngland. The components within this arrangement feature compression joinery, with interlocking dovetails joining the underside of the tie beams at the top of the plate and double tenons located perpendicular to one another on each post top. English carpenters had long known that this particular tying joint assembly, when used in combination with a common purlin roof system, re-directed an undesirable load path (due to horizontal rafter thrust at the top plates) to a much safer vertical load at post locations.

As the 17th century progressed and the Dutch colonists established themselves in east-central New York, ever-increasing numbers of English settlers, particularly from Connecticut, also began to populate the area. It was inevitable that the building traditions of these two cultures would soon mesh with one another, and this frame is a small reflection of that.

Early English/American frames had the tie beams at plate level, while Dutch timber frames featured tie beams that were below the top plates and tenoned into the sides of the posts. This frame features a very rare type of tie beam joinery that seems to be a hybrid of these two framing patterns. This tying-joint variation, while rooted in Dutch culture, has been found in barns of both English and Dutch origin. Known as a “necked” tying-joint (the end of the tie beam resembles a head and neck), and referred to in The Netherlands as “Kopbalkgebint”, this innovative tie beam joint was first discovered in a typical 30’ x 40’ ca.-1840 English hay and livestock barn located in the Green Mountains of Warren, Vermont. Only three barns in America that feature this unusual joinery arrangement have been documented so far (although others may exist). Two New World Dutch barns in New York have been found with this joinery, and the third example in the above mentioned Vermont barn. 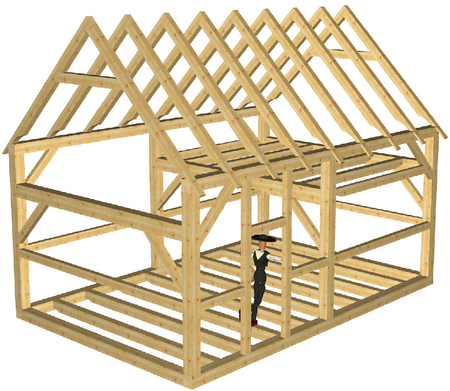 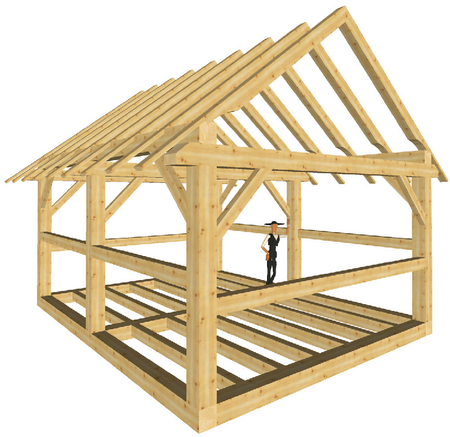 The gambrel roof design in America appears as early as the 1670s in the Peter Tufts house in Medford, Massachusetts, and seems to have been favored by the Dutch and English settlers. By the early 1900s, it became the roof form of choice for American farmers. Due to the need for increased crop storage capacity which was brought about by improvements in agricultural technology, many barns had their original gable roofs replaced with the gambrel.